The Christian Social Services Commission (CSSC) with Kilimanjaro Christian Medical Centre Culminated PBF Pilot Project in Tanzania- Rungwe Pilot by organizing National forum held at Stela Maris- Conference Centre in Bagamoyo Coastal Region.  It was officially opened by KCMC Executive Director- Prof. Ntabayi urged the participants to learn various models of performance payments in the country and come up with the model which might fit Tanzanian Context and moderated by CSSC Executive Director Mr. Peter Maduki.
The forum over-all objective was to enable participants to understand the concept of PBF and its benefits on the health services in terms of utilization, quality of health services, human resources for health, good governance, client satisfaction and some potential risks. On the other hand, the specific objectives of the PBF National forum was to share/ discuss with the key stakeholders and policy makers on PBF experiences from the members of PBF Multi-Country Network, to Share PBF Pilot Project implementation experiences in Tanzania and lesson learnt. Others being to share the result of study Paper on Spill-over effects of PBF Training in Rungwe and finally recommend for the way forward for PBF pilots in Tanzania.

Moreover, the participants were from within the country and outside the country. Within the country, the following development partners participated actively in the forum. WHO, USAID, GIZ, CDC, DANIDA, KFW.CHAI- P4P, Irish AID Embassy of Ireland.  On top of that, the Regional Multi-country PBF Director participated and presented Rwanda PBF Experience as a success story.
From the Government Institutions, the participants were from Ministry of Health and Social Welfare (MoHSW), Prime- Ministers Office Regional Administration and Local Government (PMO-RALG), National Institute for Medical Research (NIMR), Regional Medical Officer from Mbeya and DMO Rungwe.
Other stakeholders were from Church whereby a Representative of the Church from the project area participated, and one local NGO invited and participated namely SIKIKA.
Various papers were presented in the forum: Paper on Experience from Pwani P4P project by Mr. Nyombi from CHAI, PBF Rwanda Experience by Christian Habineza, Rungwe PBF Pilot by Sule, Progress with Health Financing Strategy Development- Focus P4P by Mariam Ally, PBF Training Experience in Rungwe by Dr. Njau, the perceived trickle-down effects of Rungwe PBF training by Dr. Manongi and Performance Based financing Training Experiences by Dr. Njau from WHO.

After the presentations, the participants discussed the presentations and came up with these as key messages:
-          The verification is an important component in PBF/ P4P model so this area  need to be strengthened and further studied
-          With little amount of money used on output based manner, it is possible to bring the difference in the health care sector
-          Policies need some amendment in order to accommodate PBF as it require big change/ reform in the health sector
-          There is need to have PBF professional who will back PBF implementation with the field experiences which can be used evidence
-          Political will is an important ingredient in moving PBF agenda to the next desired level
-          There is need to have sustainability plan in the form of integrating the project in the Government set-up
As a result of these discussions, the members came up with the following as a way forward:
-      Performance  Based Financing is an appropriate  strategy for improving the quality of services in Tanzania
-      To adapt PBF as Health Financing model, the following are prerequisite

verification system which is really independent

Amend policies which can back PBF implementation

Generally, the forum was successful as it attained its objective and above that it evoked the members on seeing ways of doing things differently for the sake of the majority of the people who greatly need quality health care services.
See the photo of the participants during forum proceeding. 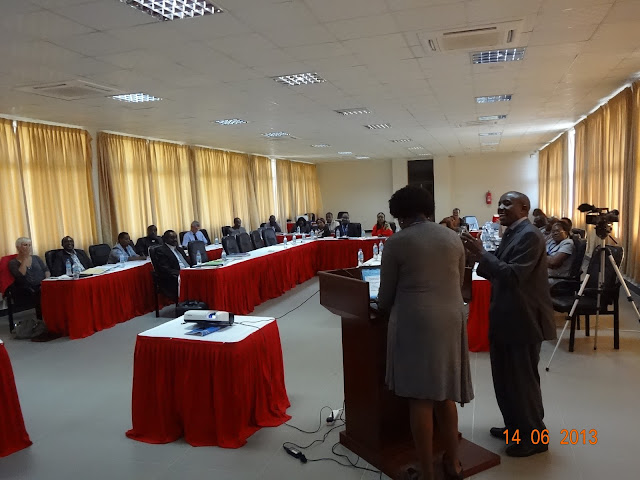 Posted by PBF Rungwe Pilot Project at 9:16 AM No comments:


Last month,the Christian Social Services Commission (CSSC) organized four days study Tour for six Tanzanian officials to Sister Organization in Zambia namely Church Health Association of Zambia (CHAZ)  from 7th to 11th April 2013 to learn how they successfully implemented PBF Pilot Project through selecting specific role and challenges they faced.  The tour was congruent with the project over-all objective which is to improve the functioning of the health sector through exchange of experiences of PBF approach from seven countries in the Network. It is worth expressing that Zambia and Tanzania are only Anglophone Countries in the Network, and thus have more or less similar health sector set up.
On 8th April 2013 the CHAZ Executive Director Ms. Carin Sichinga briefed the Tanzania delegation about her organization. Of much interest was the strong collaboration with the Government which was reflected by: Government seconding health workers to church health facilities, Supply All Essential Drugs to Faith Based Organization Health Facilities, and finally the Government Covers 75% of the running cost of the Faith Based Organization Health Facilities. It was also realized that CHAZ is the second principal recipient of the Global Fund.
There after the delegation spent two days visiting four health facilities which are implementing PBF Pilot Project on the Northern part of Zambia in Mpika namely Chilonga Hospital (owned by Catholic Church) and Mpika District Hospital. Other facilities visited are two Health Centres- Chibansa  and Chalabesa.
Moreover, the delegation also had an opportunity to visit to Local Purchasing Agency - Development Aid from People to People in Zambia (DAPP) in the project area, and Result Based Financing project (RBF) under Ministry of Health (MoH) of Zambia.
The following were the main issues observed, which were of interest to the delegation from Tanzania:
There is strong Public Private Partnership between Government of Zambia and CHAZ in health Care Provision which make Church health facilities to provide health services to the population according to Government regulation.
On the project set-up, it is well incorporated in the organizational set-up and linked to the National Level whereby one can exactly see separation of functions vital in the governance of the project.
Being Pure PBF, it was realized that all the health facilities have Business plans, and LPA monthly counter verify the quantitative data and Quality review is done accordingly by the District Medical Office team. At the end, the health facilities receive performance payment, out of which 50% is for staff motivation, 40% for investment and 10% for promoting community participation.
From the quick observations and the health facilities management site reports, it was noted that the staff were quite motivated due to bonus payment and improved infrastructures in the facilities. However, the issue of sustaining the spirit of the staff was further discussed with CHAZ and expressed that they are working on ways to sustain that.
For the case of RBF project, they have similar incentivized indicators and have wider coverage. Above that, the delegation appreciated the way they monitor Health Management Information System, of which they have a data base which is entered once at health facility and accessed by the HQT. That means, no one can temper with data easily. Of much interest was an experience sharing with PBF pilot Project under CHAZ. However, it was also realized that RBF has no strict separation of function as in PBF Pilot Project implemented by CHAZ. However, they explained that they will have project review soon to consider some improvement.
The following were the results of the four days Study Tour to CHAZ in Zambia:
First and foremost, the members of the delegation gained knowledge of implementing pure PBF project whereby the players have separate functions which promote accountability, transparency and efficiency. Second they understood how to align the organization when collaborating with other stakeholders in implementing PBF and lastly, they have captured the challenges in separation of functions in PBF projects.
The delegation was composed of the following:
-          Rt.Rev.Bishop Dr. Israel-Peter Mwakyolile- Chairman of the Zonal Policy Forum of CSSC- Southern Zone- Head of the delegation
-          Mr. Josibert J Rubona – Director of Planning and Policy MoHSW.
-           Mr. I. Lyimo- CSSC Zonal Manager-Northern Zone
-          Dr.Sungwa Ndagabwene-  District Medical Officer- Rungwe District
-          Dr.Bernard Njau-Lecturer Kilimanjaro Christian Medical Centre (KCMC)
-          Mr.Sule,T.Michael- Zonal PBF Coordinator
See the Photo: the delegation from Tanzania, staff from CHAZ  and  Mpika District Hospital Management 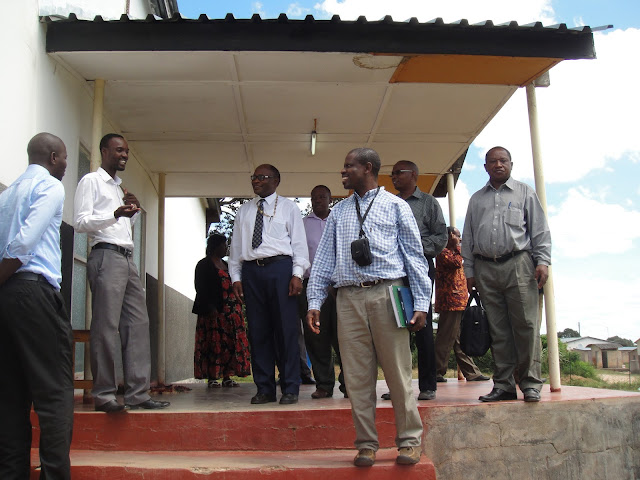 Posted by PBF Rungwe Pilot Project at 4:22 AM No comments: 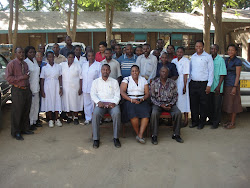 The Group photo after PBF Dissemination Meeting in Mbarali

Participants Group Photo after the Meeting